Getting Started in 22 Long Rifle ELR

Interested in taking the 22 LR to new distances? This beginner guide will give almost everything you need on how to make those long shots possible!

The versatile 22LR has been around since the late 1800’s. The basic design of the cartridge has remained relatively unchanged. A longtime favorite for squirrel hunting or introducing new shooters to our beloved pastimes, this little cartridge is now being pushed further and further than grandpa would have dreamt. From shooting pop cans in the backyard to an array of new emerging competitions, the 22LR is destined for more than small game or 50-yard smallbore bench rest matches.

It’s easy to see the economical factor that plays into this cartridge. Being relatively inexpensive and readily available, the 22LR is an obvious choice when it comes to working on fundamentals such as trigger pull, breathing or positional shooting.

There’s a certain appeal to send huge bullets well over a mile away, but for many shooters access to ranges 1 mile + are hard to come by. It’s much more likely to have convenient access to a 300-500 yard range. Quite a bit of the skills one needs to shoot a magnum caliber rifle over extreme distances are needed to shoot a 22 LR consistently over 300 yards. The amount of drop over this short distance and slight variances in wind, make this equitable to shooting a 308 Winchester at 1,000 yards. While not an exact duplication, the 22 LR can make a fantastic training round for the long range or PRS shooter wanting to work on their fundamentals.

So, what has taken the “once inadequate to 100 yards” cartridge to an exceptional trainer for the Precision Rifle Series (PRS)and Extreme Long Range (ELR) shooters? How are these shooters hitting reasonable sized targets at 300 yards or more? 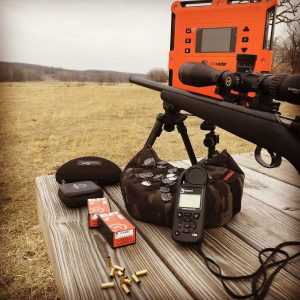 It doesn’t take much to get started. In fact, if you’ve been shooting for a while, it’s quite possible that you have most of the gear you will need.

A scope capable of dialing for your intended distance, paired with the appropriate rail offset, more on that later.

Bipod/shooting rest, rear bags: There’s a plethora of options here. Use what you are comfortable with.

While many shooters are comfortable with shooting tight groups from a rest, it’s not always practical. A Bipod and a rear bag are much more convenient when going from bench to prone positions. Not every range has benches available, so the versatility of the bipod and rear bag are a solid choice.

A ballistic calculator: There are several good downloadable phone apps such as Strelok Pro if you’re on a budget, or a stand-alone Kestrel weather meter with built in ballistics calculator if funds allow.

If you are serious about repeatable and consistent ballistic solutions, I’d highly recommend the Kestrel for reasons we will review later.

Chronograph: While not 100% necessary, it certainly eliminates some variables and takes a lot of guesswork out.

Which Scope and base?

For decades, rifle scopes have had more than enough magnification to see small 1-2 MOA targets well beyond our 22 LR extreme long-range goal of 500+ yards. Sure, more magnification is nice, but these shots are practical and reasonable at even 15x magnification or less. It certainly does depend on your eyes, so we can leave that up for debate.

A scopes ability to make precise and accurate adjustments, and the image resolution the glass gives you is arguably more important than what your maximum magnification is. Given the amount of elevation adjustment you need to send a slow 40 grain bullet to these distances, you must have a scope that can make these adjustments accurately and repeatably. Good glass will make it much easier to spot your hits and misses.

When you are deciding on which scope to use and how to mount it, you will want to roughly estimate how much your bullet will drop at a given distance. In your ballistic app, begin by setting up a new gun profile with what you expect your variables to be. For instance, go ahead and run the exercise with several different bullets in different velocity ranges to see what kind elevation correction you should expect.

A 40gr 22LR at roughly 1080 FPS will drop somewhere in the ball park of 70 MOA at 400 yards. A 147gr 6.5 Creedmoor leaving the barrel at 2695 FPS on the other hand, will make it almost to 1 mile before it requires the same 70 MOA of elevation adjustment. The key here is to have a rough idea how much elevation adjustment you will need for your intended purpose.

The typical 30mm scope such as the Midas TAC 6-24×50 will have up to 80 MOA of total elevation adjustment. That means your scope can dial up 40 MOA and down 40 MOA. Referring back to our example of a 22 LR at 400 yards, we know we need roughly, 70 MOA. In a perfect world, if you pair your 80 MOA scope with a 30 MOA rail, you will have a more usable range of elevation adjustment for these longer shots. This offset will now give you 70 MOA up and 10 MOA down. For most setups, this is going to allow you to have a 50 yard zero and the ability to dial your elevation to nearly 400 yards, before you need to use your reticle to holdover. Moving to a 34mm scope like the Ares ETR 4.5-30×56 with 110 MOA total elevation paired with the same 30 MOA rail will give you 85 MOA up and 25 MOA down. If your firearms shoots naturally high or low, this set up would give a little more leeway.

Having a good estimate of your intended distance and the amount vertical correction you will need is the key to determining which scope and base combination you will need. Be sure to check the total elevation adjustment specification when deciding on which scope will best suite your needs.

22 LR is capable of both incredible and dismal groups. Each firearm can be particular as to which bullet it prefers. You’ll want to start with an assortment of 22 LR ammunition to test to find what your rifle prefers. At minimum, I’d suggest finding a round that groups no greater than ½” at 50 yards. Keep in mind, what works in one rifle, may not be the best choice in yours.  Finding a load that groups well at 50 yards is relatively easy, but for long range shooting, we need to look a little further.

Consistent velocity is important in making consistent impacts down range. While a 30 FPS difference from shot to shot doesn’t make much difference on center fire cartridges at 300 yards, it will with the 22LR.

30 FPS difference from your fastest to slowest round (Extreme Spread) can be almost a full 4 MOA difference in elevation! If your target is 10” at 300 yards (slightly larger than 3 MOA), this velocity spread would result in your bullet having a vertical spread of over 10” at 300 yards, larger than the target you are engaging.

A chronograph will help you determine how consistent your ammunition velocity is. Ideally, your extreme spread (ES) and standard deviation (SD) will be in the single digits. Once you’ve found a consistent round, stick with that specific lot number. 22 LR can vary quite a bit from lot to lot. I’ve seen one lot with single digit ES and SD and the next lot of the same brand and model with a 30 FPS or higher spread.

But it’s off at longer ranges!

Your scopes mounted, you’ve found the appropriate ammo, your calculator has given you the solution and you’ve made the corrections. Now it’s time to send it! Your first 3 rounds hit a couple MOA low, so you adjust and finally connect with your target. What happened? Why didn’t you make a first-round impact? Just like the folks shooting the King of 2 Mile competition, there’s a lot of variables that need to be accounted for to make consistent with a 22 LR at extreme distances.

Minute changes in weather can have quite the effect on 22 LR at longer distances. This is where maintaining a good shooting log is really going to benefit you. A small change in density altitude (a combination air temperature, barometric pressure, and dewpoint), wind speed or wind direction, can have a much more accentuated effect on this small bullet than your typical centerfire cartridge at 300 yards. These changes in variables can influence both your elevation adjustment and windage. Knowing weather data at your location rather than a weather station several miles down the road is a huge benefit. This is where having a Kestrel or similar device is handy.

Ballistic coefficient (BC) models such as the G7 and G1 models used for many of todays aerodynamic bullets are available even for .22 LR. However, the old standard G1 is more representative of the antiquated heeled design of the 22 LR. Bullet.  At these distances, however, no drag model may accurately represent the changes the bullet will undergo through flight. At these distances, you may need to use a custom drag model, drop scale factor, (depending on which ballistic calculator you are using) or create your own trajectory chart by referring to your shooting logs to see what has worked for you in those particular conditions in the past.

Modifying your BC by using custom drag model or drop scale factor isn’t necessary. It really depends on what your goals are and to what lengths you want to go. If you want to develop your skills to make repeatable shots from day to day, this is a great exercise. On the other hand, its an awful lot of fun to just chase a pop can around at the longer distances.

4 Responses to “Getting Started in 22 Long Rifle ELR”